Mario Party 10 is a party video game developed by Nd Cube and published by Nintendo for Wii U. It is the tenth "main" game in the Mario Party series, the fourteenth in the franchise, and the first and only game in the series for the Wii U. The game was released worldwide in March 2015.

Mario Party 10 continues the tradition of the Mario Party series, in which four players, controlled by either human or CPU, compete against each other on a game board by participating in various minigames. Along with the standard competitive modes, the game introduces two new modes called Bowser Party and Amiibo Party.

A select few mini-games still crash when encountered, but most work now. You will still need a wiimote to control some of these mini-games since they tend to use the wiimote pointer.

To play some mini-games (Bowser mode), use a "Gamepad" profile (Pro Controller don't work) and the "Separate Gamepad View" with your mouse (buttons which only appear on the gamepad and not on the TV).
For some minigames, you need Motion Controls to play correctly (ex: Bowser's Bad Breath).

To play set controller 1 using a "Gamepad" profile (Pro Controller don't work) and then use the "Separate Gamepad View" with your mouse (buttons which only appear on the Gamepad and not on the TV).
Then set the remaining game controllers (up to four in total) as Wiimote. Use of motion controls is supported in the game and to use a Wiimote correctly a Dolphin Bar is necessary. Connecting Wiimotes via bluetooth is supported however the accuracy of the onscreen pointer may not function correctly using bluetooth so some testing is needed.
NOTE If you plan to use a Dolphin Bar it may help to install the Dolphin emulator as well and configure the wiimotes through that as well. 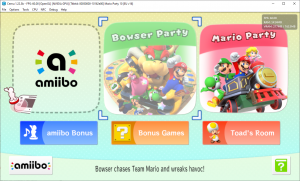 Cemu supports the reading of Amiibo .bin files however saving a configuration to an Amiibo is required before gameplay can begin and saving (as of version 1.22.3) is not currently function.
Bowser Party
Mario Party 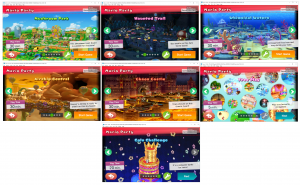 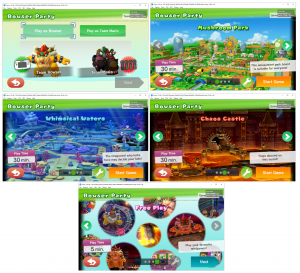 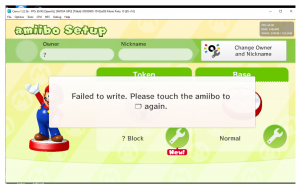