Game Profiles are specific configurations for individual games that allow the user to set the options used when emulating a specific game. This allows the user to load a game without needing to reconfigure Cemu every time.

Note: If no value is set in the Game profile, Cemu will use the setting chosen when selecting options inside Cemu.

loadSharedLibraries = true If set to true, system rpl files will be loaded from /cafeLibs/ if present. Default value is true

startWithPadView = true If set to true, the Separate Gamepad View for the Gamepad will be launched automatically when booting a game.

accurateShaderMul = true Determines if Cemu will correctly emulate the non-IEEE behavior of the shader MUL instruction. Can fix graphic issues but also decreases shader performance and increases shader compile time. Default value is true. Since Cemu 1.7.5 the option also supports a third mode min. In this mode, Cemu will emulate non-IEEE MUL instructions in a GPU-friendly way which generates less complex shaders. However, this mode might not be 100% accurate.

UseSeparableShaders = true If set to false Cemu will use the Conventional Shader system from pre-1.8.0.

disableGPUFence = false If set to true, GPU fence operations will be skipped. Default value is false. Enabling this option can lead to instability and crashes.

streamoutBufferCacheSize = 24 The buffer cache size of the streamout buffer in MB.

extendedTextureReadback = false If set to true, Cemu will try to mirror data written by GPU operations to CPU RAM (but only if access by CPU is assumed to be likely) Default value is false.

emulateSinglePrecision = true If set to false, the recompiler won't correctly round the result of single-precision instructions in certain situations. This can introduce gameplay bugs, but might also improve performance.

Game profiles are stored in the gameProfiles folder of your Cemu installation. When a game is loaded, its matching game profile will be used. To see what profile is being used, load a game and find the TitleId in the title bar of the window or look in the log.txt file after loading. Search for the TitleId inside the gameProfiles folder without the dash to find the file Cemu is using. 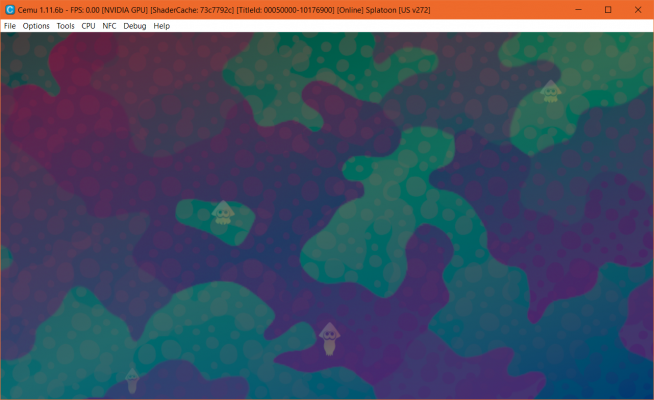 The TitleId is shown in the title bar of the window 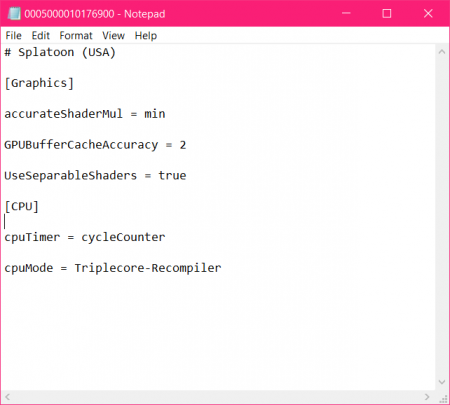 A sample game profile for the game Splatoon
Retrieved from "https://wiki.cemu.info/index.php?title=Tutorial:Game_Profiles&oldid=14735"
Category: