First of all, make sure you've followed the getting started guide, as well as Serfrost's setup guide for Cemu.
In many cases a simple mistake has been made, like loading the update .rpx instead of loading base game which leads to an instant crash.

There can be many different issues to this. Everything from loading the wrong .rpx too broken game files or wrong settings set in Cemu.
Let's start off from the top;

- Make sure you are loading the base game. If you just installed a update, Cemu will show the folder for the update if you choose "File-->Load".

- Next up set CPU Mode back to "Single-Core Recompiler" (assuming you've changed that for whatever reason).

- Still getting weird crashes? Reset any other settings you've changed back to default or delete the "settings.xml"

My game tells me to update my Wii U 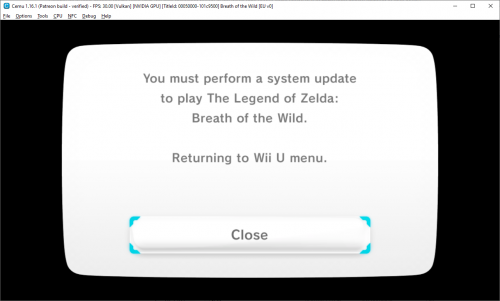 This is Nintendo's way to say that you're actually missing the day one update, which was pushed out on the release day of the game you're trying to load.
Simply install the latest game update available for your game via Cemu's update and DLC installer (click File --> Install Update / DLC and direct it to the meta folder of the update)

All my saves are gone and so are my DLC and game updates!

Did you recently update Cemu or move it around?
A lot of people set a path for the "mlc-folder", which isn't really needed since it defaults to the one within the Cemu-folder if nothing else is specified.
This folder contains all of your saves, installed updates, DLC and even account files for your online profile if you've dumped and installed those.
Now what you actually need to do is to find the existing folder you had. (you most likely linked cemu to the one inside the Cemu-folder at the installation point, so redirect it the same one if what you probably have to do).

This is shaders and pipelines that are being cached.


NOTE! It's normal to experience stutters when you're reusing your old shader cache from openGL when using Vulkan.
Vulkan has pipeline stutter which comes from the GPU vendors side, hence why there isn't any notification when they are created.
Therefor it is recommended to start over when switching over to using the Vulkan API. Shaders are caches way faster than what openGL did and leaves a much smoother first time experience.

There's no way to avoid this, besides actually playing the game and collect those shaders.
Once one is collected, it won't stutter again for the same thing / area.
Some games have a running demo at start before you get into the game menus, like Mario Kart 8. Just let the game sit there and play through those demos for a while before starting to enjoy the game.

Best tip here is to read through the motion controls wiki and double check yourself and your setup according to provided guide.

My game is now crashing or having weird performance / graphics displayed

Windows has for some reason started to auto download GPU-drivers between major updates and many times tends to pick an older driver for your GPU.
Check your control panel for your GPU and see if there's an update. If not and the weirdness continues, consider to do a DDU of your GPU-driver.

Still got issues? Ask for help on our Discord Server

If you're going to ask for help, head over to our discord server and find your way to the #troubleshooting channel.
Please provide the log.txt text file which you can find next to the cemu.exe.
The text file will clear itself every time you open up Cemu, so make sure you either got Cemu running while uploading it or upload it directly after a crash.
The most preferred way to send a log.txt is to simply drag that file into this discord window and drop it.
And always leave notes on what you were trying to do upon the crash / bug!