Need for Speed: Most Wanted U

Need for Speed: Most Wanted U for Wii U, the definitive Most Wanted experience, utilizes the unique features of the Wii U GamePad to introduce “Co-Driver” where your friend plays using the Wii Remote and you can activate Boost U, adjust cop difficulty and change mods using the Wii U GamePad, as they race their way to the top of the Most Wanted list! 2012’s driving game of the year comes complete with full online play, the connected, open world city of Fairhaven and of course the hot cars and intense cop chases that made Most Wanted. 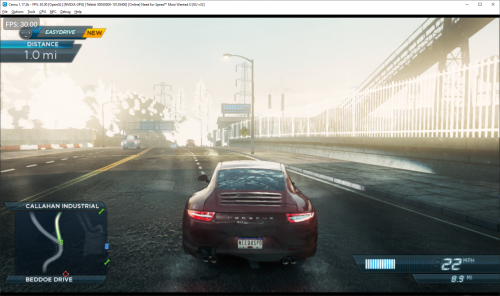 This game needs it's GPU Buffer accuracy cache set to high.
Also changing the recompiler from single-core to dual-core will give you a fps boost.
It is not certain that it will cause in-game crashes doing so yet.