It is recommended to use Vulkan and choose Single-core recompiler in the game profile for the optimal experience.

The image below shows a summary of the whole game situation starting fresh with Cemu 1.15.0e with some additional statistics included (no 100% save used). As of 11 May 2019 the best version of CEMU to run this game was 1.15.3. Version 1.15.5 introduced graphical glitches on level 1-4 (rotating device) and version 1.15.6 introduced rendering issues when starting or leaving a level/house in yoshi's village. However, as of 19 April 2021, using 1.22.10, none of these issues occure anymore. 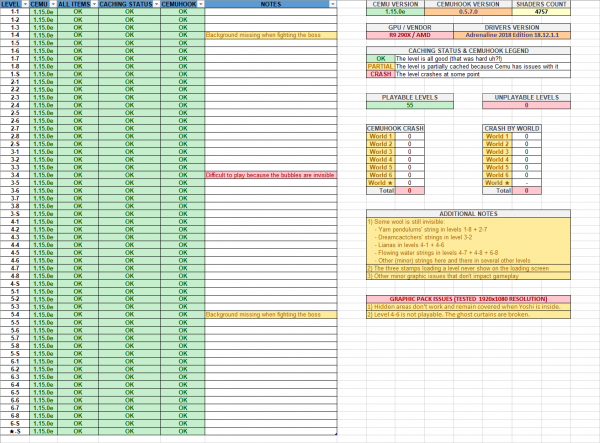 Using 1.22.10, the Vulkan API and Single-core recompiler, the game runs perfectly with 60 FPS, at any resolution and with no glitches.